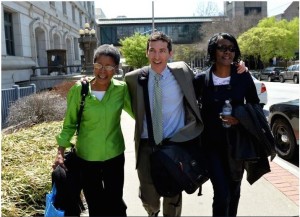 Dessa Curb, Sandy Wallack and Curb’s sister, Aleesa Williams, leave the courthouse after being acquitted in the APS cheating trial.

After many long months of work and deliberations, I am pleased to report that my client, Dessa Curb, a teacher at Dobbs Elementary, was found not guilty on all charges when the final verdict was read. She is the only one of the 12 on trial that was found not guilty and the remaining defendants were taken into custody immediately after the verdicts were read. See below for some of the early press coverage of the verdict.

11 Alive: APS Verdict: The defendants and the charges (previous photos/article)